To celebrate its 280th anniversary, Swiss watchmaker Jaquet Droz has launched the Parrot Repeater Pocket Watch. A very unique watch with decorative traditional gem decoration techniques that adorn the watch. The pocket watch is delivered in 56 mm gold . 216 yellow diamonds 0, 72 carats. Repeater. Caliber RMA88. Power reserve up to 48 hours. Mother-of-pearl dial. In addition to the clock comes a chain and a plate of pink gold 750 with 125 emeralds. 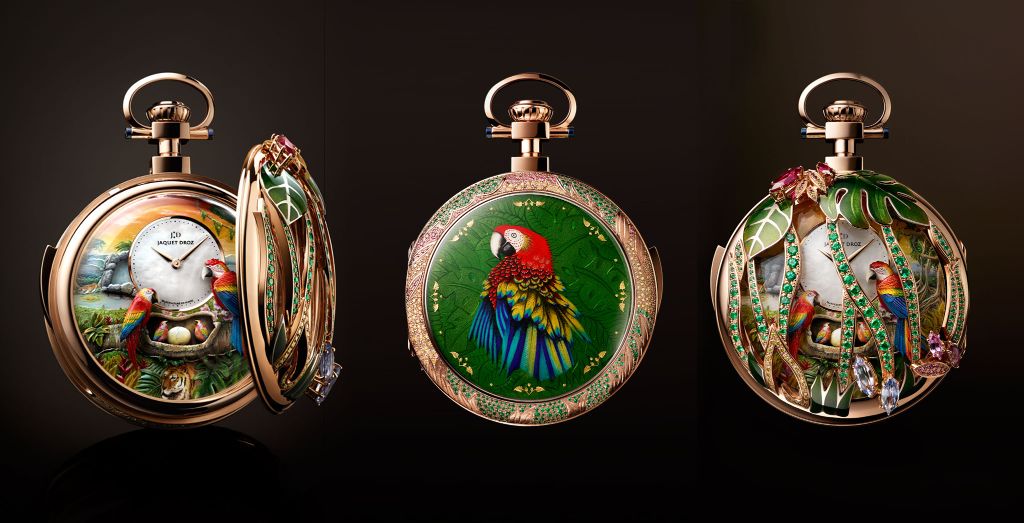 The dial is covered with a transparent anti-glare glass made of high-strength sapphire crystal, which provides maximum protection against chips and mechanical damage. 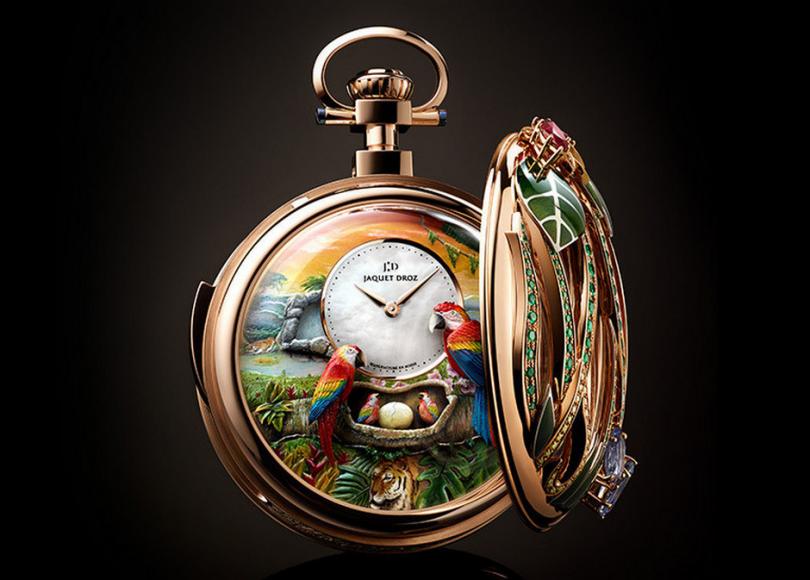 The vivid work of art from the clock depicts a lively naturalistic scene in which the beloved bird motif of Jaquet Droz takes center stage. Each of the five macaw families is lively and is surrounded by a lush forest of vines and hibiscus. In addition, a bird of paradise and two tigers can also be seen on the scene. The Parrot Repeater’s is made up of 688 manual assemblies that perform extremely complex bell functions.Taking more than three years to create this masterpiece, every artisan technique of the company has joined forces to bring forth an exquisite piece to mark this memorable occasion. 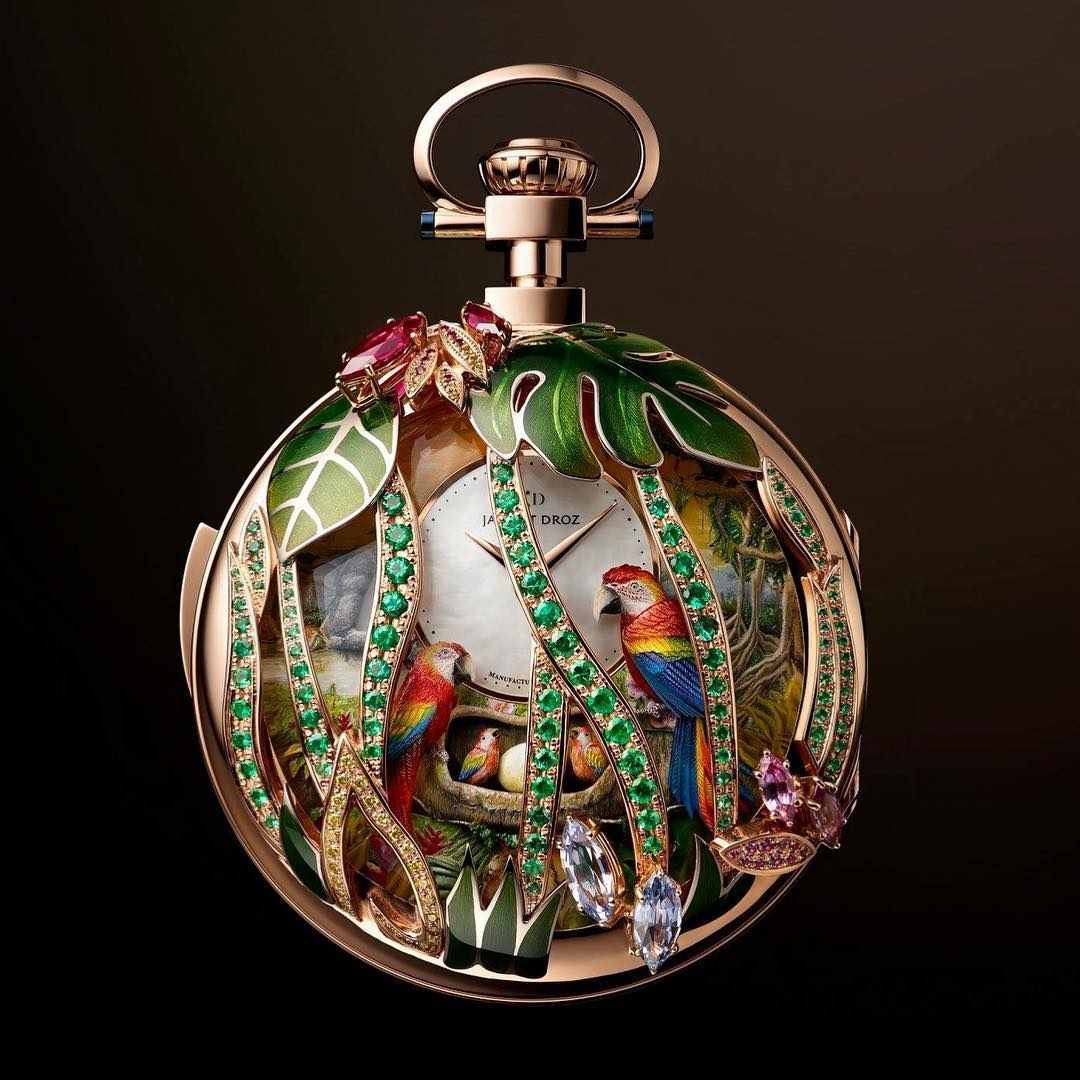 The Parrot Repeater Pocket Watch is a one-off a kind  and is priced at  $1.05 million.

TAG Heuer just introduced three new models to their  Aquaracer Carbon Edition, all three models are featured with black PVD case.The Carbon Aquaracer is available in three models, each standing out thanks to hints of blue, yellow, or rose gold. The 41mm black PVD-covered titanium case houses the carbon bezel. The dial boasts an imitation carbon effect. It’s, therefore, a watch that’s durable and solid, but above all, light. The full black look, subtly illuminated by hints of colour, lends the piece elegance and modernity. 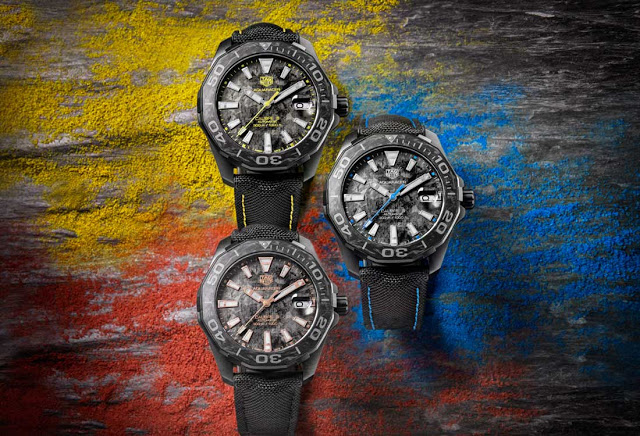 The watches are powered by the automatic Calibre 5 movement which beats at 28’800 vph and offers a power reserve of 38 hours. Waterproof to 300m. Aquaracer Carbon is the perfect watch for the outdoor adventure lover while maintaining the stylish, sporty look that’s inseparable from TAG Heuer. The black textile strap has top stitching that echoes the colours of the dial.Available from Sept 3 @ https://www.tagheuer.com/en

Captain James Cook  (7 November 1728 – 14 February 1779) was a British explorer, navigator, cartographer, and captain in the Royal Navy. Cook made detailed maps of Newfoundland prior to making three voyages to the Pacific Ocean, during which he achieved the first recorded European contact with the eastern coastline of Australia and the Hawaiian Islands, and the first recorded circumnavigation of New Zealand.Cook was attacked and killed in 1779 during his third exploratory voyage in the Pacific while attempting to kidnap Kalaniʻōpuʻu, a Hawaiian chief, in order to reclaim a cutter stolen from one of his ships. He left a legacy of scientific and geographical knowledge which influenced his successors well into the 20th century, and numerous memorials worldwide have been dedicated to him.

Swiss watch maker Rado introduced the First Rado Hyperchrome Captain Cook range of diver watches in the legendary explorers name in in 1962,ever since Rado as been constantly upgrading the range with newer material and designs. 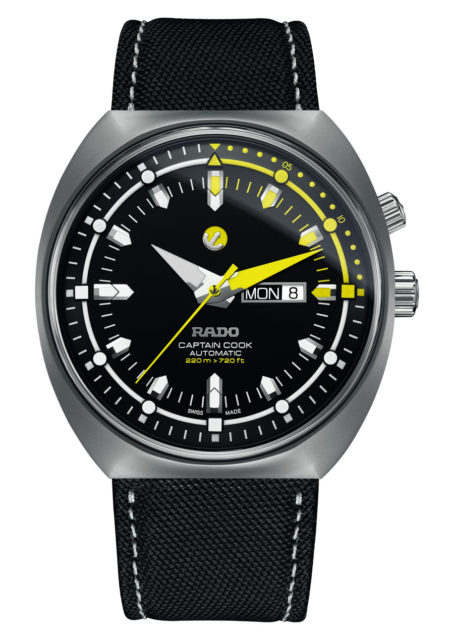 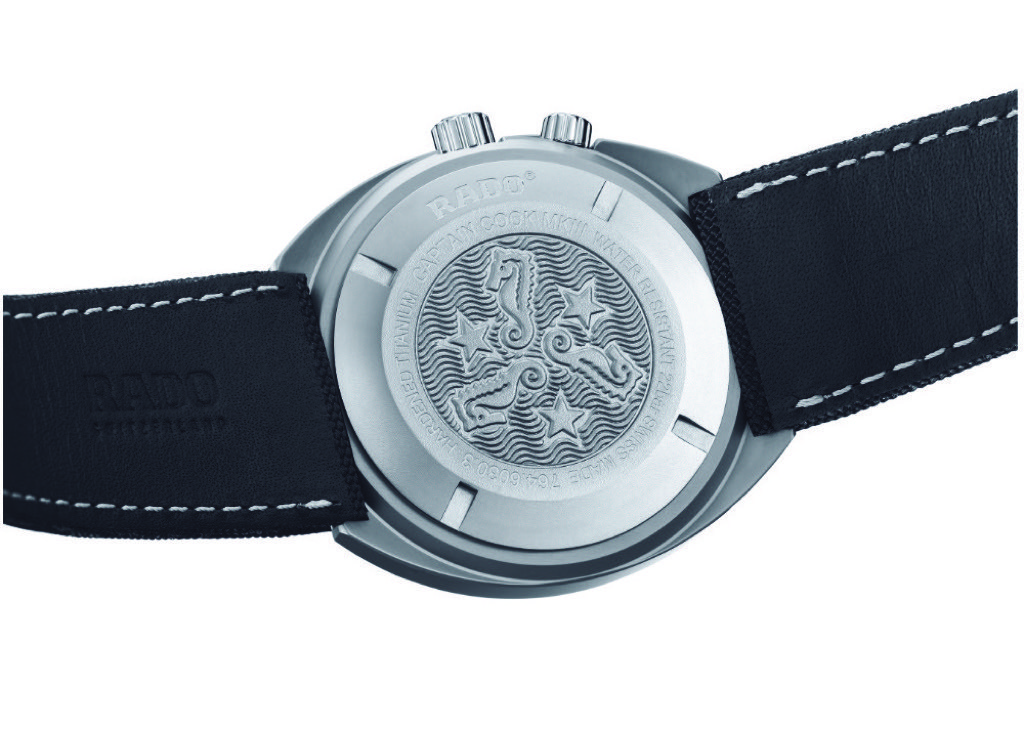 The latest Rado Captain Cook Mk. III Automatic re-issue is lighter and much bigger with its case measuring  46.8 mm,The case is super-lightweight grade five titanium, known for its scratch-resistance, while the movement features a power reserve of up to 80 hours.Divers features include a inner unidirectional rotational timing-ring, operable via the crown at 2 o’clock and 220 meters or 770 feet of water-resistance.

Available exclusively at  Macy’s in the US and at  RADO dealers worldwide from October for  2550 USD.