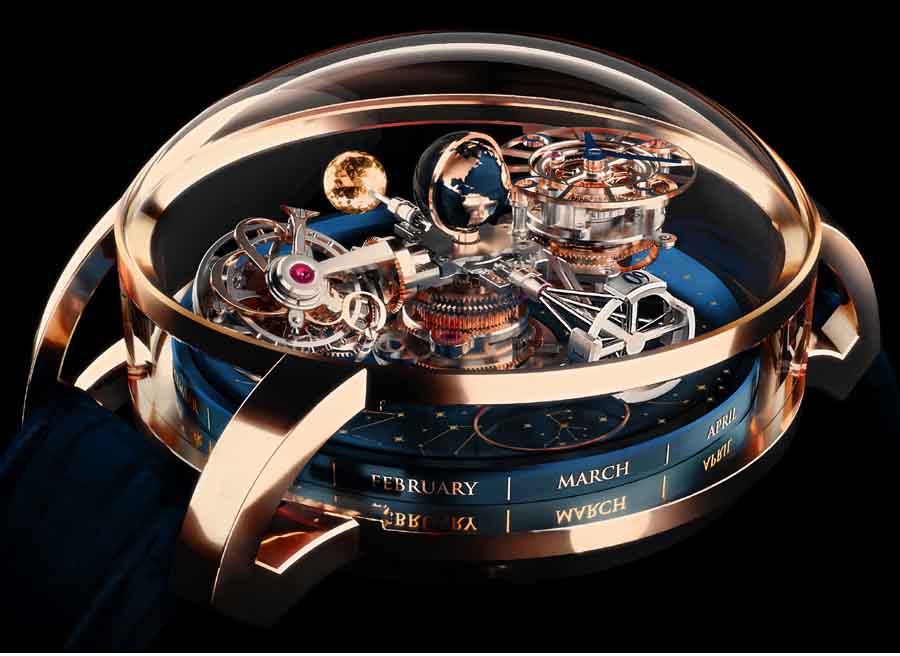 The patented Jacob Cut of the spherical 288-facet diamond symbolizing the moon lights up the celestial vault depicted on the dial that it sweeps around in 20 minutes, all the while performing 60-second rotations on its own axis. Truly mesmerizing! Yet this is only one of the eight main characteristics of the Astronomia Sky, equipped with a triple-axis gravitational tourbillon with astronomical sidereal display.

For the first time ever, a sidereal calendar is depicted in three dimensions, while a star-studded sky appearing on a grade 5 titanium dial makes one rotation in a sidereal year: the time required for the Earth to complete its orbit and, as seen from the earth, for the sun to regain the same position among the stars in the celestial vault. The globe levitating in the center naturally performs its rotation in one sidereal day and is complemented by a day/night indicator. The Astronomia Sky also comprises a perpetual calendar, with months displayed on the edge of the dial and visible through the domed crystal.

Only 18 individually numbered pieces will be made.

Watchbazar feels that The Astronomia Gravitational Triple Axis Tourbillon was already an extremely complicated watch. The new Astronomia Sky takes the challenge even further and Jacob & Co did it well.

IWC Schaffhausen for 2020 has reworked its best se

The latest Big Bang Jellyfish marks the return of

The newly developed Caliber 3X22 used in the 50th