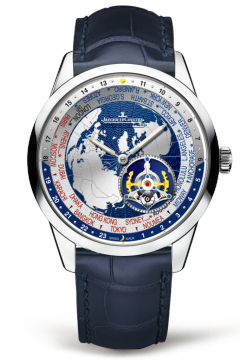 The blue portions of the dial, which represent the oceans, are hand guillochéd in a wave pattern, and 26 global cities are marked on the outer ring. It’s an automatic movement with a pink-gold winding rotor and 48-hour power reserve.The platinum 43.5mm case is water resistant to 50 metres, and features an sapphire case back.

Available in a limited series of 100 pieces.

OMEGA SPEEDMASTER “DARK SIDE OF THE MOON” APOLLO...