A.L. Breguet became a member of the Board of Longitude in 1814 and the following year gained an official appointment as chronometer-maker to the French Navy. He entered the French Academy of Sciences in 1816 as a full member, and received the Chevalier of the Legion of Honor from the hands of Louis XVIII in 1819. Breguet’s name is one of the 72 names inscribed on the Eiffel Tower from the hands of LOUIS XVIII in 1819. 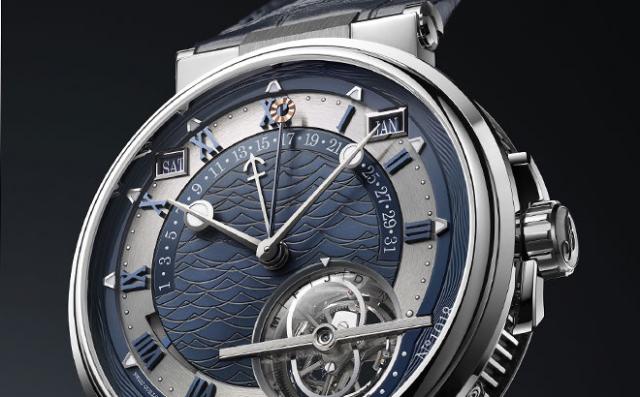 Breguets watches are a heritage of excellence while translating the traditional values of precision watchmaking into a contemporary form. Baselworld 2017 they presented their new Marine Équation Marchante 5887 which features a running equation of time, a perpetual calendar and a tourbillon which allows us to indicate the difference between the average solar time (hours and minutes civil) in which all the days have the same duration of 24 hours and the real solar time (solar hours and minutes) . The difference between these two measures can range from less 16 minutes to more 14 minutes, coinciding only for four days a year equivalent times. 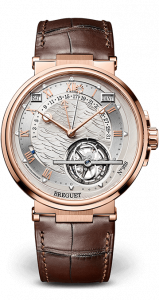 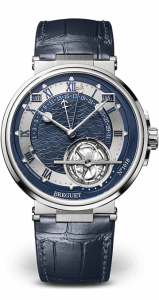 The complexity that the running equation of time brings to this model is naturally complemented on this “Grande Complication” by a perpetual calendar. Two apertures – one between 10 and 11 o’clock and the other between 1 and 2 o’clock – respectively display the days of the week as well as the months and the leap-year cycle. The date appears inside the chapter ring by means of a retrograde hand tipped with an anchor motif and sweeping across an arc running from 9 to 3 o’clock. The dial layout of the information has been carefully designed to ensure simple and intuitive linear reading, along with impeccable visual appeal.Of all these functions, a self-loading 581DPE automatic numbered caliper, signed and numbered by Breguet, carries a silicon exhaust wheel and inverted-side anchor with silicon handles, operating at a frequency of 4 Hz and set to six positions.

Cars and Their Clocks